Blog written for thesewcialists.com in May 2109

When the Sewcialists asked me to write about brave sewing, my first thought was of taking part in The Great British Sewing Bee this year.  That was an intense lesson in how to sew bravely – garments and fabrics we hadn’t tried before all under time pressure and on camera.  It’s only looking back on the experience that I realised we were indeed 10 brave souls adventuring on the seas of an ultimate sewing challenge.

But I can’t tell you anything you didn’t see if you watched the show, so where’s the fun in that?  Instead, I thought I’d tell you about the coat I made at the tail end of last year, in a lush green Harris Tweed, and why that was brave sewing.

I love Harris Tweed.  And Shetland Tweed and the wools they weave in Bute and in the Borders and really all of our Scottish heritage fabrics.  But Harris Tweed holds a special magic for me because it’s a truly beautiful fabric and also Harris is one of my favourite places.

If you don’t know it, Harris is an island in the Outer Hebrides 40 miles off the west coast of Scotland.  My first visit was 20 odd years ago, my then-boyfriend and I took the train from our home in Glasgow to Oban, and then a 5 hour trip on the Caledonian MacBrayne ferry to Castlebay in Barra, and then we got on our bikes.

We cycled about 200 miles right up the spine of the islands, from the white sand double beaches of Vatersay, past the airport in Barra where the plane lands on the cockle-shell beach at low tide, and through landscape that looked like the moon in South Uist.  We stopped to admire the wild ponies, crashed our bikes into each other looking at a family of otters by the road side and woke up to the rare call of corncrakes in Benbecula.  We cycled right round the outside and then back through the middle of North Uist, and finally took the CalMac to the tip of Harris and Lewis.

The landscape is jaw-dropping: white silky beaches with clear turquoise sea, and the green and purple hills and peat moors.  When you’re cycling you can smell the wild flowers of the machair, the strip between beach and land.  And mostly you have this to yourself, it’s a far-flung place not overcrowded with visitors.

Harris is actually joined to Lewis but they’re known as 2 separate islands, I think because there is a huge hill between them.  It’s a long, slow haul up but then you get to the top and can fly down the other side on your bike like one of the witches from Macbeth: glorious.  The islands are home to the standing stones at Calanais, the incredible beaches at Uig and Luskentyre and of course lots of cottage-industry weaving. 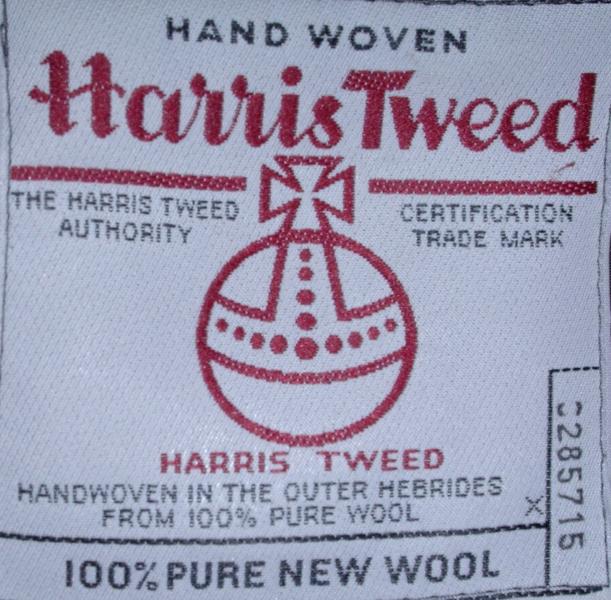 When you’re in Harris you pass croft houses with a shed in the garden, and you can hear the clack-clack of the loom.  In my experience most of the weavers will be happy to show you their work and you get a terrific sense of the heritage of this fabric.  Called clò-mòr in Gaelic, which translates as “big cloth”, it’s been produced by the islanders from their own wool for centuries.

I hope I’m giving you an idea of the astonishing beauty of the place where this fabric is woven, the care with which it’s created and the importance of its place in our Scottish textile heritage.  But of course it’s not the cheapest!  I was in a shop in Glasgow last year and came across a bolt of a beautiful green Harris Tweed, with a small chevron pattern, and splashed out on just enough for a knee length coat.

So I did feel brave laying the cloth out and cutting the pattern pieces.  I made a full toile first, and as usual extensively hacked the pattern.  I wanted a simple shape with a generous collar.  I’m quite tall and have broad shoulders and I always have a lot of adjustments to make, so the toile took a while.

I managed to squeeze the pattern into the meterage I’d bought, and even had a strip for a belt.  You might have seen my recent experience of trying to make a lined wool coat in a limited time period, if you did you’ll understand my absolute glee at being able to take 2 weeks to make this coat.  I tacked everything, the pad stitching in the collar was all done by hand, and I tacked the collar together, pinned it to a tailor’s ham, then steamed it like a clootie dumpling.  It took 24 hours to dry, but you should see the roll on it!  There are shoulder stays and a back stay and every hem is reinforced with weft-insert knitted interfacing then trimmed and notched at the fold.

The button band is mostly hidden, when they’re all done up you can only see the top button.  But of course I wear this coat open more often than not so I wanted the buttons to do justice to the fabric, and my hard work.  I’ve been going to college to study silversmithing, but after filming the Bee could not get my head out of sewing.  The answer – make some sewing related things instead of jewellery.  That’s when I made the thimble for Mercedes, with a wee bee on it, and I also started to enamel buttons.  The base metal is copper, punched and drilled then filed to a smooth finish.  The buttons on my coat have I think 4 or 5 layers of glass enamel on them, blue underneath then a green on top to get the right colour.  They’re quite organic, no two are the same because I’m not very practised at enamelling, but that’s part of the charm for me.

I also had an idea to make a copper label for this coat, again at my jewellery class.  I scrabbled around in a drawer full of random letter punches and finally found what I needed.  The label is enamelled on the back, to protect the fabric, and that gives an oxidised effect to the front.  I polished it a bit to bring out the letters, but not too much, and I love it.  In fact it’s become my logo for my website and I’m using it on packaging now for some items I’ve designed.

I’ve been back to the Outer Hebrides a few times since, with my then-boyfriend now-husband and our children, and it still holds the same magic for me.   We’re having lovely warm weather here in Scotland just now but you know, it’s not a hot country so I’ll get lots of wear from my coat and I expect it to be a wardrobe staple for years to come.

So, that’s my story about a brave piece of sewing.  I’m looking forward to hearing about yours!

A bit about me: I’m Scottish, living in Glasgow and I’ve been sewing and knitting for longer than I can remember. I do lots of other crafts as well including felting, weaving, silversithing and photography. I took part in The Great British Sewing Bee 2019, on BBC2 in the UK, and got to the semi final. I have a website at www.jenhogg.co.uk and am on Instagram and Facebook as @jenerates.

Sewcialists is a hyper-inclusive editorial site. We recognize that all of us make up an amazing and varied community. We ask that you take each challenge as you see it fitting in your life, and express your involvement how you like, at the given time. Our challenges are for the pure enjoyment of participation and the love of community.

A Stevie for Christmas